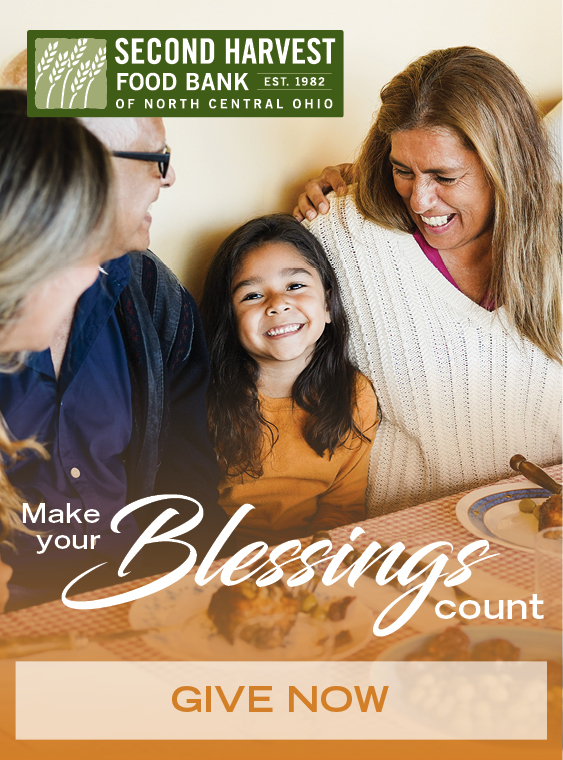 From our Blog
Recent Articles

A Note From Julie

It all started with a man named John Van Hengel. In 1967, John volunteered in the soup kitchen of a Catholic church in Phoenix. He bought an old milk delivery truck and used it to gather citrus fruit gleaned from farmer’s fields which he delivered to the soup kitchen and homeless missions. When he realized the volume of food that was being thrown away by farmers and grocery stores, his goal was to create a more efficient method to distribute food. So, with a $3,000 donation from St. Mary’s church and a donated building – food banking was started.

The concept of food banking reached eastward in the late 70s and early 80s. As the country was gripped by a recession in the early 80s, a local group of concerned citizens led by Jeptha Carroll (pictured), Eric Nord, and Evan Nord created the County Cupboard. At that time, they viewed it as a temporary solution.

In our earliest days we were in a storefront in Vermilion, next to what is now Fifth Third Bank, and later moved to the site on Leavitt Road, where distribution continued to expand. Our first truck was purchased through the Buck for a Truck campaign – spearheaded by the Stocker Foundation. In the mid-90s, the board changed the name from County Cupboard to Second Harvest Food Bank of North Central Ohio and undertook an ambitious campaign to build a new facility. We were the first food bank in the state to build a facility of its kind.

Over the past 10 years, Second Harvest has tripled the distribution of food and grocery products to our network of partner charities. Many children, senior citizens, veterans, and families living on fixed incomes are trying to make ends meet in an economy that is struggling to recover.

Operations began June 1, 2015, from the Nordson Food Distribution Center, situated on over 5 acres of land on Baumhart Road in Lorain. We have tripled our capacity and increased our ability to provide healthy and nutritious food to our neighbors in need.

For the past 40 years, Second Harvest has been the lifeline for thousands in North Central Ohio. Beginning in mid-March of 2020, the Covid-19 pandemic brought on a once-in-a-lifetime (we hope!) crisis. The average number of people we served instantly doubled every week. At some distributions, almost half were seeking food assistance for the first time.

To meet this increase in demand, the Second Harvest team quickly organized and transitioned our mobile distributions to a no-touch drive-thru model and asked our hot meal programs to begin serving to-go meals. For everyone’s health and safety, we immediately purchased thousands of boxes, bags, to-go cartons, gloves, disinfectants, and other supplies to protect those helping with the distributions.

We were in uncharted territory and even with the addition of the safety protocols and additional supplies, many of our partner charities ceased operations due to a lack of staff and volunteers. At the height of the pandemic, only 65% of the hot meal programs and 75% of the pantries remained open and operating.

Forced to respond, Second Harvest changed the method of distribution and expanded our reach to now help those in areas with high need and no access to service. Our organization learned valuable lessons. We acted nimbly in thought and deed, and consistently evaluated, revised, and put in place best practices as we moved through the crisis. Our dedicated team showed up every day and never faltered, responding to whatever challenge was presented with tenacity and compassion. And we worked with YOU; our donors, community members, volunteers, the Ohio National Guard and Air National Guard, school districts municipalities, and partner charities to meet the need.

Celebrating 40 Years of Service to the Community

It was the early 1980s, and the country was in the throes of an economic recession. A group of thoughtful, committedcitizens led by Jeptha Carrell, Eric Nord, and Evan Nord created the County Cupboard as a temporary solution to help the community during tough times. From those very humble beginnings in a small storefront to the Nordson Food Distribution Center where we sit today, we stand on the shoulders of our founders and the many people who are committed to making our community a better place.

Eric and Evan Nord exemplified giving in action. Eric and Evan’s commitment to their community ignited the creation and proliferation of many crucial organizations in Lorain County that still serve our neighbors today. Their selflessness, drive, and generosity of spirit served as fitting partners to Jeptha Carrell,an unassuming servant leader who had incredible accomplishments throughout his life, but he was especially proud of the creation of the County Cupboard. His vast experience in the nonprofit sector attracted Eric and Evan Nord to name him as the first full-time director of the Nordson Foundation (precursor to the Nordson Corporation Foundation and the Nord Family Foundation).

Cecilia Render, Executive Director of the Nordson Corporation Foundation reflected on the legacy of our founders as we kick off our 40th anniversary: “Nordson is proud to carry on the tradition of supporting the Second Harvest Foodbank now celebrating 40 years. We share in the excitement and honor that due to the foresight of our founders, Eric and Evan Nord along with Jeptha Carrell, Lorain and the surrounding counties have such a wonderful organization dedicated to the well-being of our communities. Congratulations Second Harvest of North Central Ohio!”

Throughout 2022 we celebrate our 40th anniversary and honor those who have had a part in getting us here. We hope you will join us throughout the year at some of the events, programs, and celebrations we have planned.

Some of the events planned include:

While Second Harvest has come a long way in 40 years, we are not done. Our vision of creating a healthier, hunger-free community is as important and relevant today as it was in 1982. We are grateful for each of you that has been a part of our history and look forward to growing hope with you in the years to come.